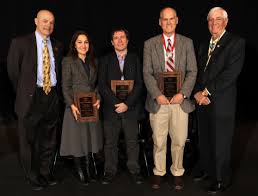 “I’m thrilled to see our staff recognized at this prestigious competition,” said KRWG senior manager Adrian Velarde. “We’re fortunate to have such a talented group producing this high level of content for our viewers in southwest New Mexico and far west Texas.”

“I am extremely proud to receive this Emmy award,” Widmer said. “We put a lot of hard work into all of our productions, but I think our ‘Living Here’ pieces are the most rewarding. These projects allow us to think outside the box and create stories that give our viewers a unique perspective. To be recognized by our peers in the television industry is a great honor, and I am so proud of our production team.”

Escandón said he was astounded by the honor win, however is glad for all the work done at KRWG.

“Winning this Emmy was very special to me because I didn’t really expect it,” Escandón said. “Being recognized by your peers for your work is special and truly an honor.”

Valle said he was propelled to deliver the “Best of Living Here” appear by the measure of show portions KRWG has created exclusively since 2015. He composed and delivered five half-hour shows including 23 portions that concentrated on better places and individuals in southern New Mexico, from the state parks to the various cities in the area and museums that spread an assortment of points, to neighborhood artists with an exceptional specialty and memorable spots of importance that individuals may not think about.

“Winning this award means that our work is recognized by our peers and we have achieved the highest level of excellence in our field. It feels great to be recognized,” Valle said. “This award means a great deal to achieve but it all comes down to being a team and the support from everyone at the station has helped in one way or another.”